French Arty for tourney next weekend?

These fine 155mm howitzers were a key part of the defense of France (snicker).

All pieces and parts here are BF and are for the most part quality. The single trail on the cannons makes them a much easier build than the dual trail versions.

Although I retain my hatred of most faces sculpted for this line. I mean... Is it something with the mold that makes most of the faces look like formless blobs of hate? I know you can do this! The command figure wearing the shako has a great grumpy look on his face! Why can't you replicate similar human looking features on other models?

Two modeling painting notes. First, I've continued the tree theme on the staff team and the observer but I just couldn't conscience putting trees on the arty stands, it didn't really make sense. Second, the shako worn by artillery officers was dark blue with gold braiding (thank you Osprey books) so I did my best to replicate that here.

Off to the pics!

Hey ya Soldats. In pursuit of painting up a full EW French army by ohhh... next weekend I finally decided to tackle the infantry platoon.

It's been a little while since I knocked out a platoon of infantry so it was slow going to start. And the French EW infantry are of mixed quality, so it was a bit of bear.

But I also totally love a well based infantry platoon. It really does add something to the table when you play. For this group I decided to go a bit bigger than I did with the Germans. These dudes are hanging out in a forest. Or, at least, a copse of small trees.

BF had some issues with models, some of the faces are just awful (a recurring theme I'm noticing in the EW stuff) and the legs on some of the models are flat, oddly shaped and pock marked, blerg. But I will always take the chunky style BF dudes over the smaller, more properly proportioned PSC ones because I think they pop better on the table and there's more "space" for me to work with on each dude.

This is also the first infantry platoon that I painted that lacked either camouflage or winter bits. So on that level it was both interesting and a little boring. Probably why I put more effort into highlighting them and putting together the bases.

Well, that was all the exposition I had :) Enjoy the pics:

Way more after the break!

I mean, it's an armored truck with a giant gun on the back. Not like Bunkerflak big or anything, but still this little guy got more than his fair share of tank kills during the invasion of France and the low countries so it simply had to go into my army.

Also, it's a great piece of kit on your gaming board as well. It's speedy (but wheeled, so be careful), has a solid gun and an MG for when you need to focus on those squishy infantry dudes. In combination with Panhards, for lifting gone to ground or putting additional pressure on those lightly armored targets, this guy really sings.

Today I bring you a unit of 5 of these guys, along with 4 Panhards I just painted up as well. They end up looking like this: 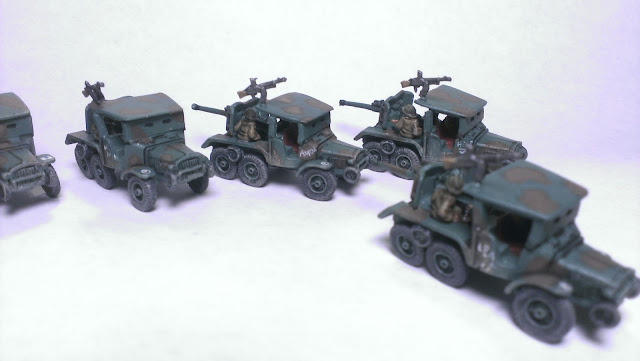 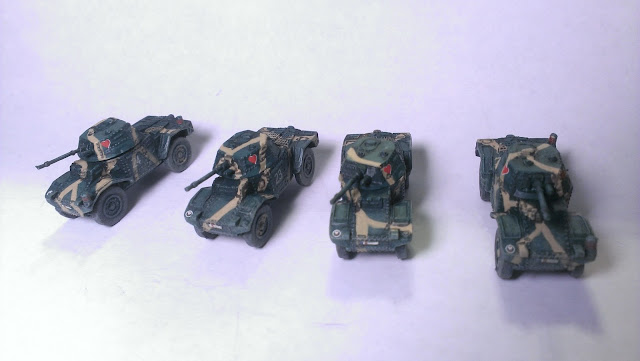 For more glorious full color images (and some more historical ones of the Laffly's) get past the break! 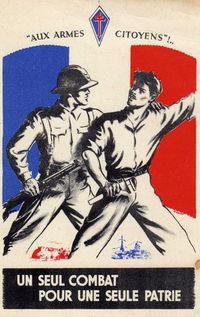 My homie Ben "Loon" and I are hard at work on putting together our early war armies. As you've seen from the blog I'm doing French, and he'll be joining with a German list.

Yesterday, we decided to put the paint brushes down and get in a game.  Our first in the Early War era (well, I played a few at NOVA last year but not with an army I'd want to play :) There had been much smack talk around the hacienda recently so we decided to put our money where our mouths are.

Ben is bringing his motorcycle gang (Aufklarungschwadron to you historically minded folks) while I'm throwing down the always loveable Panhards in a 1625 point hold the line scenario with the Germans on the attack.

First off, the lists! 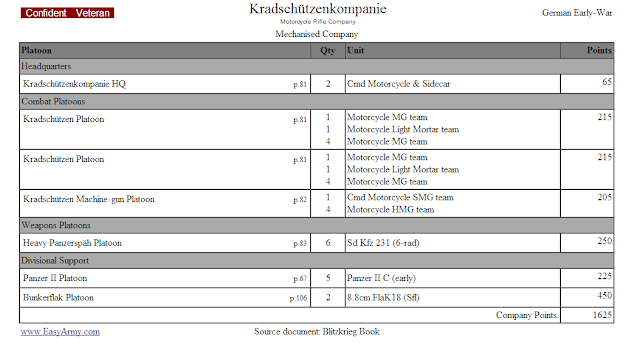 Weighing in at 1625 points with 8 platoons, including the fearsome Bunkerflak, Loon brings the Nazi's on motorbikes. 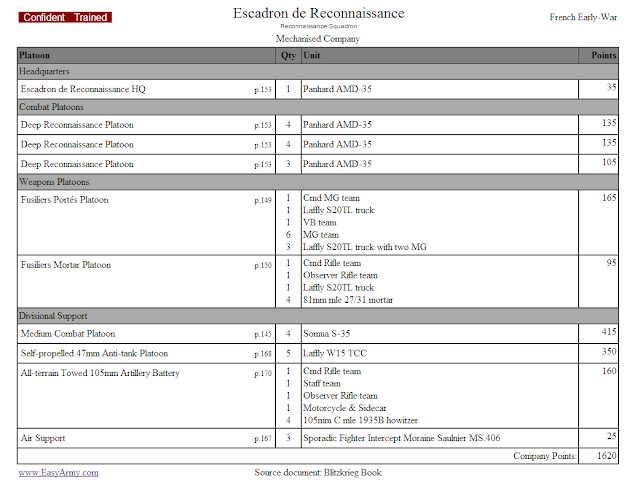 And in the very very French corner weighing in at 1620 points with 8 platoons are the gentlemen in their armored jalopys!

Now, on to the game! (After the break) 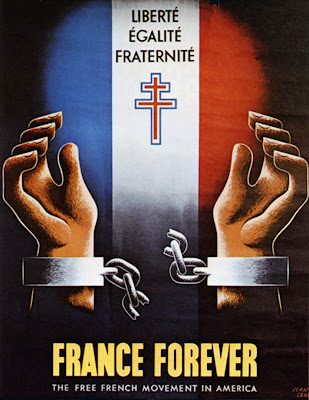 So for today I've got the first 3 Panhards of my French Early War reconnaissance army. I'm painting this up for an early war tournament at Huzzah Hobbies up near Dulles Airport here in Northern Virginia.

The Panhard is a pretty sweet little guy. A wheeled unit, with a solid gun, armor that isn't 0 and it looks freaking cool.

I've always wanted to do an armored car company (well a couple, as the mid-war Brits have some sweet machines as well) and the upcoming event has given me the perfect excuse to do so.

So what about the history of the Panhard? Well, i'm glad you asked. Wikipedia just told me that the nick name of the AMD Panhard 178 was the Pan-Pan... I likely won't ever call it that.

The little guy had a solid top speed of about 44 miles per hour, was armed with a 25mm Cannon and a co-axial machine gun to mow down all those fleeing Germans (right...)

She was a pretty expensive and modern little lass for her time with a silenced turret and a production cost higher than many light tanks.

The battlefront version is much cheaper, about 12 bucks a pop, talk about economy of scale! (Get it?) And it was a snap to put together.

And, I think they paint up real nice as well: 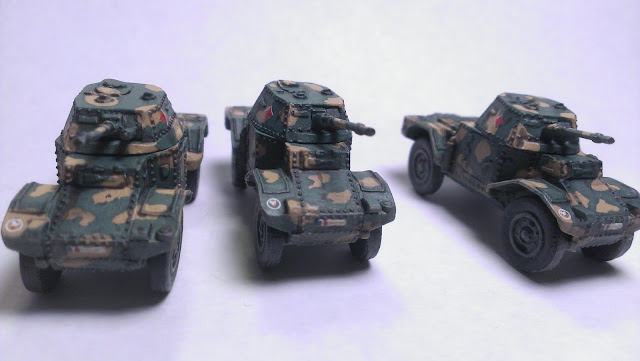 Now, on to more pics after the break!

Welcome To Throck of War!

The Iron Curtain Will Rise